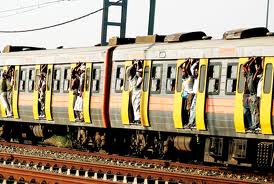 This was published in the Cape Times as “Time to make one class fit everyone on Metrorail and get rid of snobbery between coaches”, 5 December 2011. (Apologies to non-South Africans for local content. Will return to more universal matters in the new year. Promise!)

I’m glad I can use the train for my daily traveling. I enjoy not being in a car and all the hassles that go with that. I enjoy feeling so greenly virtuous.

I’ve almost always travelled third class on the train – sorry, I mean Metro class. It feels safer. In fact, the only time I’ve felt really nervous I was alone in a first class (oops, Metro Plus) carriage with one very edgy man. There are always more people in Metro class, more women, more mothers with children. It’s also half the price and – as I heard one man joke, watching people run up the platform – we all get to the station at the same time. END_OF_DOCUMENT_TOKEN_TO_BE_REPLACED

Who are we? is the question posed in a timely series presented by the Cape Times and the Institute for Justice and Reconciliation. Really, it’s incredible. If “I am because we are”, and we are not the “we” we thought we were – then who am I? If “a person is a person through other people”, and we’re not getting through to each other – then what am I?

Rather than reach immediately for an answer to this terribly urgent question, perhaps we should slow down enough to reconsider it. Or, as Njabulo Ndebele beautifully suggested recently, to “wake up and re-dream” ourselves. It does stir us up. Whoever and whatever else we may be, we are the ones in question. We are called to account for ourselves, as if everything depends on this, our moment in history. It’s the new Senzenina. It’s terrifying and exhilarating.

Who are we? It’s an open question. You can walk right in. (Just leave the door open behind you, thanks.) It’s already crowded and noisy here, heated with opinions, ideas, critiques and proposals for “the way going forward”. END_OF_DOCUMENT_TOKEN_TO_BE_REPLACED

The Cape Times (Cape Town) published an edited version of this as “If we are cynical about our politicians, we will get the leaders we deserve”, 1 November 2010

Against the horizon of the media tribunal disputes here, I have been thinking about how we chatterers create the conditions for the political leadership we get, and wondering if we couldn’t do it better.

Politicians must be the last group of people that can be maligned in polite society with impunity, or even relish. A bunch of crooks, fat cats at the trough, only out for themselves, inept, corrupt. Right? You hear it on the train, in the coffee shop, at the golf course. You read it in the papers. It’s not uncommon. But it’s a big problem.

In fact, it’s misguided on every level. One: it’s bad logic, a flawed thought that assumes what it sets out to prove. Two: it’s toxic to democracy. This kind of cynicism tears down, but builds nothing. It offers us only the tools of suspicion, manipulation and regulation. That’s not freedom. Three: it’s a disservice. A good leader is just someone who hasn’t been caught yet and a great leader can only appear as an exception to the rule – incomprehensible, miraculous, messianic – which is neither helpful nor true. Four: it’s nasty. It’s unpleasant, ugly and mean.

The very worst thing about this politicophobia is that it promotes more and more corrupt politicians. END_OF_DOCUMENT_TOKEN_TO_BE_REPLACED

1. Re-imagining the Social in South Africa: Critique, Theory and Post-apartheid Society (Jacklin and Vale, eds)
2. Nurtureshock: Why everything we think about raising our children is wrong (Bronson & Merryman)
3. Africa: The Politics of Suffering and Smiling (Chabal)

Ten chapters, eleven academics, all theorising “the social” and the state of “social theory” in South Africa. The immediate question for a non-academic (but sociable) reader trying to make sense of our current muddle: is there something helpful here? Well yes, there is.

Imagine: to form an image in the mind. The many opinions South Africans hold about the state we’re in and where we’re going reflect our own varied states of mind, our dreams and prejudices, what we imagine this country is or has been or is supposed to be. 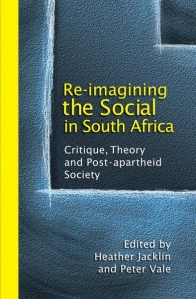 And there has been a change in the way we have imagined a democratic South Africa, from the experiences of apartheid and struggle though the years of transition from Mandela to Mbeki and now Zuma. It feels like our perhaps naive imaginings hit a wall along the way, and some fresh “re-imagining” is certainly in order. END_OF_DOCUMENT_TOKEN_TO_BE_REPLACED

Nurtureshock: Why everything we think about raising our children is wrong
Po Bronson & Ashley Merryman
Ebury Press 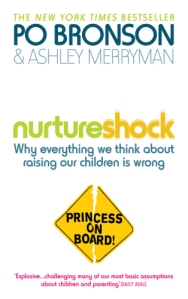 It’s a close call to say whether Nurtureshock manages to be more informative than it is annoying. The first irritant has to be the subtitle. To whom is this meant to appeal? Insecure parents who are ready to think the worst of themselves? Shame on you!

Once safely past the cover, the book’s premise is straightforward. Parents naturally want to nurture and protect their children, but much of their thinking is “polluted by a hodgepodge of wishful thinking, moralistic biases, contagious fads, personal history and old (disproven) psychology”. Bronson and Merryman, regular contributors to New York Magazine, want to set us straight with this survey of the latest research from the “fascinating new science of children”. END_OF_DOCUMENT_TOKEN_TO_BE_REPLACED 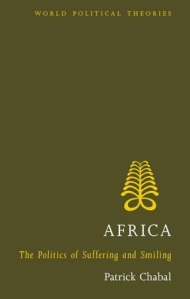 As a Canadian immigrant to South Africa, I have struggled mightily to understand post-colonial African politics. I have a feeling I’m not alone. (Colonial politics may have been horrific, but at least it made sense.)

Since independence, we have witnessed an array of socio-political behaviour that evades any such coherence, making it difficult to imagine a way to greater peace and stability in the continent. Political theory imported from the global North doesn’t get us there, demonstrating that its explanatory power does not have universal reach. But Africanist theories, rooted in local understandings of Africa’s difference, have also fallen short – often by trying (and failing) to posit an original and essential Africanness.

From the Cape Times, 1 December 2009, in their series on “The Next Economy”

No wonder they can’t fix it: it doesn’t exist

It’s another day in the global financial crisis and I’m looking at the front page of Business Report: “Worse still to come, says economist”. The article offers three expert opinions. One says that the global economy could face a second dip as a result of recent massive injections of liquidity. Another sees a threat in South Africa’s reliance on exports. The third is hopeful the current recovery will be sustained.

On SAfm’s Market Update, they speak confidently of corrections, profit taking, sideways adjustments and – my favourite – the dead cat bounce. Yesterday the analyst said that prices had fallen because “traders were nervous”. Why were they nervous? “No, it’s a herd thing,” he laughs. “They’ll sell first and make up a reason later.” He’s equally frank today why the market has rallied. He doesn’t know – but he’ll “take it”.

Such are the specialists who report on the performance of the economy. They have two things in common. First, their analysis is not very reliable. Second, they all work primarily in the financial sector. This is the sector that, internationally, has caused all the trouble. Can somebody tell me why we’re still listening almost exclusively to them? Why share prices are the measure of everything?

Look. See. This emperor is stark naked. His counsellors are blinkered or blind. These economists (and financial journalists) didn’t see the crisis coming and they don’t know the way out. The empire’s treasury has been stripped by bandits who are laughing all the way to the bailed-out bank. Even Joseph Stiglitz says so. END_OF_DOCUMENT_TOKEN_TO_BE_REPLACED 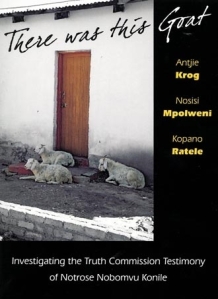 What do you do when someone says something to you that you don’t understand?

It happens all the time. The someone may be someone we know or a stranger. The event might be inconsequential or it might be important. It is always unsettling. The usual, easy choice is to let it go by, hoping that the miscommunication will either become clear or fade away in time. The safe choice is to dismiss the other as incomprehensible, or to interpret the misunderstanding away.

The difficult and risky choice is to walk into the confusion and ambiguity of not knowing quite where we stand with this person who is speaking to us. There was this Goat: Investigating the Truth Commission Testimony of Notrose Nobomvu Konile is the story of such an adventure. END_OF_DOCUMENT_TOKEN_TO_BE_REPLACED